Croc In The River

This is a screen shot of Panther Island Pavilion's FB page from June 3rd. 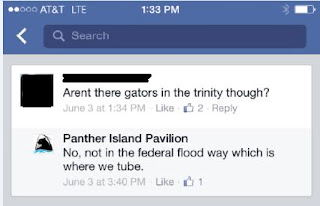 A woman asked if there were alligators in the Trinity River.

She received the above reply.  "No, not in the federal flood way which is where we tube."

Did anyone tell the alligators they're prohibited from federal flood way?

If so, a certain alligator has some explaining to do.  On June 26th, an alligator was sited near Fort Worth's Panther Island Pavilion, where the wild and crazy people go "Rockin the River".

Maybe the alligator mistakenly heard Croc in the river and wanted to make some new friends.

NBC 5 interviewed Matt Oliver, spokesman for the TRV Boondoggle. Matt tried to assure the public there was no need to worry and stated, "It's making its way up stream now, and it's kind of making its way where it can get back to where it belongs." Ok Matt, what do you mean by "kind of".  Is it gone or not?

Matt explained, "You know turtles are very docile, keep to themselves, but if you go around a turtle and you start messing with it, that's when it can be harmful.". "So it's kind of one of those things that if you see it you don't mess with it."  No "kind of" about it, definitely don't mess with it.

If Matt's uncle was Troy from Swamp People, perhaps I'd have more confidence in what Matt had to say, but he's not. Matt's uncle is Jim Oliver, the general mis-manager of TRWD.  If you're asking yourself if that's nepotism, you're right, but until I came on board there was an exception clause in TRWD's Ethics Policy which allowed the general manager, assistant general manager, and Board to make exceptions to the Ethics Policy at any time.

Too bad there's not an alligator wrangler in the Oliver family.

Posted by Mary Kelleher at 6:38 PM

A few years ago, we were watching fireworks along the Trinity, just south of the PIP. My wife and I swore that the animal we could see slowly swimming - with the long tail - was a gator. Too dark to tell for sure, but I have no idea what else it could have been. Never mentioned it before, as we figured people would think us crazy.

Well, you're not crazy. It probably was an alligator. A 10 footer was killed on Trinity Blvd a couple of years ago. Not too far-fetched actually. God only knows what's in the river. Have you ever watched the show River Monsters? There was an episode shot on Trinity River.

River Monsters? Isn't that the program highlighting the TRWD and its corrupt board (present blogger excluded, of course) and rampant nepotism/cronyism?

Very interesting Miss Mary. Don't know a lot about alligators, but from what I have heard they generally hang around where there is food. Then again I believe alligators eat almost anything.

There was a news report this morning about an alligator attack. I did not hear the whole report, something about a kid being snatch out of an alligator's mouth and then the father got bit. It had down near the coast at Lake Charlotte in the Trinity River floodplain. Maybe Matt Oliver's alligator "belongs". If so upstream is the wrong way. Maybe TRWD could put up signs for the alligators "Lake Charlotte" and an arrow?