Fort Worth Bonds....We Are Being Played the Fort Worth Way! 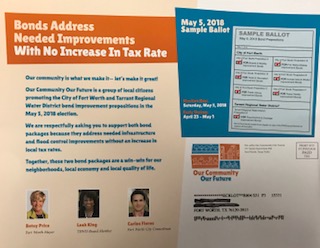 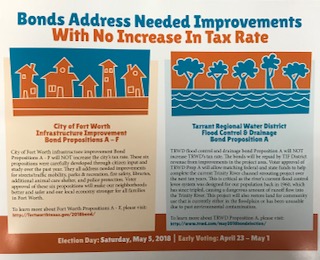 I'm voting NO to all of the propositions and here's why.

But how do we know that's what we're actually getting?  Does anyone ever read the proposition in its entirety?

And that, my friends, is just what our politicians are banking on....literally....the un-informed voter. And I have to admit I resemble that remark....but not this time!  I have done my homework!

It was the Tarrant Regional Water District proposition that made me ask questions.

Because our elected officials know we wouldn't knowingly vote to spend $250 million for an economic development project that benefits a select group of local citizens.

And just who is this select group of local citizens?

The answer lies in the fancy political propoganda most of in Fort Worth recently received from the Our Community Our Future group promoting the upcoming Fort Worth and Tarrant Regional Water District (TRWD) bonds.

The Our Community Our Future group is none other than the usual Fort Worth Way Good Old Boys and Girls.....Mayor Betsy Price, the Fort Worth Chamber, TRWD Board Member Marty Leonard, and last but not least, Hon. Mike Moncrief.  They've been able to raise close to $400,000  to con us into voting for hundreds of millions of dollars in bonds for "improvements" which may not actually be what they claim to be.  I'm going to bet US Rep. Kay Granger donated too but I won't be able to confirm this until Texas Ethics Commission publishes their report on Monday.

So....what's in it for them?  Let's make the connections.

Mayor Betsy Price actually wasn't a Panther Island supporter or at least that's what she told voters when she ran for election in 2011.  It's doubtful she has anything financial to gain from Panther Island.....she just does what US Rep. Kay Granger tells her to do.

TRWD Board Member Marty Leonard's family owns property from the northwest bank of the Trinity River to downtown.  I still love Marty Leonard though, she's a class act and I don't think she has a mean bone in her body...I think she's just been brainwashed by her lifelong friends.

Hon. Mike Moncrief was Mayor of Fort Worth from 2003 to 2011.  He is suspected to be one of the dons of Panther Island. It's believed Mike's motivation is as simple as Bruce Springsteen's Glory Days.

US Rep. Kay Granger has been using her position for personal gain for decades.  She secured millions in federal funds in the late 1990s to build a commuter rail from Fort Worth to Dallas after purchasing an old building across from the now Intermodal Transportation Center.  There was no consequence for that so why not do it again?!  This time she secured more than $50 million for the Panther Island project, then bought a condominium about 1/2 mile from the project with her son JD Granger who just coincidentally is the executive director of the Panther Island project and earns a yearly salary of almost $200,000 despite having no experience in this field (which is probably the reason the project is way over budget and way behind in progress).

Our Community Our Future......evidently it's about theirs not ours!

Vote NO on all of these propositions!

Posted by Mary Kelleher at 7:37 PM